When it comes to picking a workout split that maximizes muscle growth, there’s a lot of factors that need to be considered.

But due to the optimal training frequency and realistic time commitment of an upper lower split, it makes it an effective split for many lifters that can be easily adjusted based on your training experience.

I’ve personally incorporated upper lower splits into my own training regimen for the past couple years and here’s where it’s gotten me (naturally, of course!): 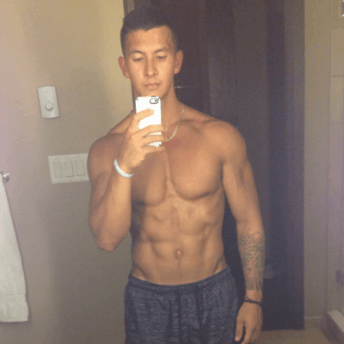 There’s no doubt it works.

But the key is choosing the right upper body exercises to make up your science based workout. In this article, I’ll show you exactly how to do just that in a way that’s backed by science.

…and stick around to the end of the article where I’ll provide you with a free downloadable PDF of the upper body workout that you can start using at the gym right away!

What is an Upper Lower Split?

First off, for those who are unaware, an upper lower split simply involves splitting up your workouts into upper and lower body workout days. Often 2 of each is performed every week. Ideally, you’d want to organize the split like so:

Although the exact days for each workout is not important, it’s best to include a rest day after two consecutive days of training to allow sufficient recovery.

How to Set Up Your Upper Body Workouts

Now as for the best exercises to include in your upper body workouts, a good way to set it up is by sticking to the following guideline:

Choosing your exercises in this fashion ensures that your muscles are worked in a balanced manner. This helps prevent imbalances from developing and helps target all of the upper body musculature. This also prevents certain stabilizer muscles from being overworked, since each plane of movement is addressed.
So with that being said, let’s take a look at what the optimal workout might look like.

Through the added shoulder flexion of this movement, incline dumbbell presses will put more emphasis on the clavicular head of the pecs, or the upper chest, which is more often than not a weak point for most people. 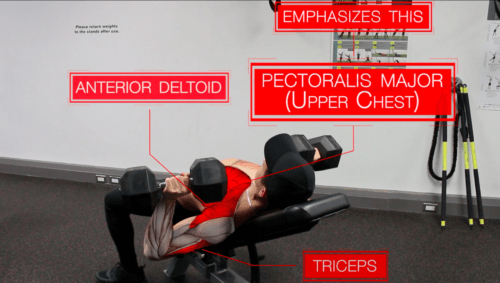 One EMG analysis by Bret Contreras found that out of 15 different chest exercises, incline dumbbell presses were found to be the most effective compound movement for upper chest activation.
Therefore, by starting with this exercise you’re able to effectively prioritize the upper chest.
And since utilizing dumbbells as opposed to a barbell more effectively prevents muscle imbalances from occurring and allows a greater range of motion, it makes incline dumbbell presses the ideal option for the horizontal push exercise of this workout.

Now as for the best incline setting, research tends to show that the optimal bench angle is between 30 to 56 degrees.
I’ve personally found the best activation with a 30 degree incline, but experiment with it and see what best activates your chest (For more exercises, check out my article on the best chest workout for mass)

You want to move onto a horizontal rowing movement for your next upper body exercise.
As noted in my back workout article, my personal favorite is the chest-supported row which will effectively target pretty much all of the upper back musculature. 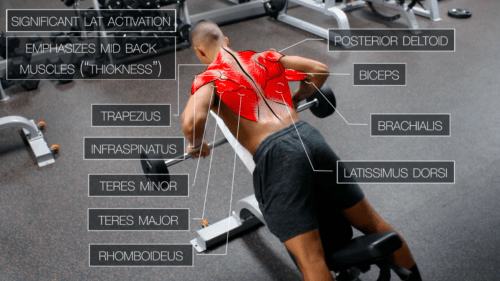 One study by Lehman and colleagues found that rowing movements provide similar levels of lat activation as lat pulldowns but more activation in other areas of the back like the traps and rhomboids.
Therefore, it’s essential to include at least one rowing exercise in your routine for both back width and thickness.
I suggest using some form of a chest-supported row in this upper body workout because it helps minimize the involvement of the lower back – which as you’ll see will be heavily involved in the next exercise.

Other exercises like the barbell row do have their place for back development. But given that research shows they elicit high lower back involvement relative to other back exercises, their inclusion in an upper body workout needs to be carefully thought out.

Next you want to move onto a vertical pressing movement.
The overhead press is an ideal choice due to the ability to easily overload it with weight and target several muscles at once. 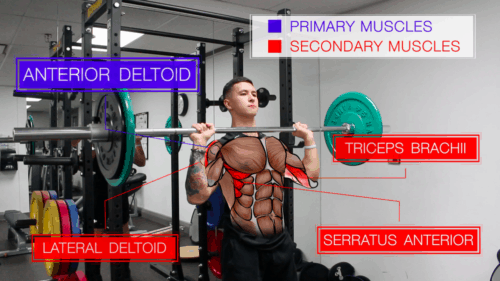 It mainly targets the anterior deltoid with some involvement of the lateral and posterior heads. It also heavily stresses the core, the triceps, and the serratus anterior muscle to help push and stabilize the weight overhead.
And, as explained in my shoulder workout article, I’d argue it’s the only upper body exercise needed for the anterior deltoid.
This is because studies like this one by Behren & buskies found the overhead press to be the best exercise for the anterior deltoid. It was shown to outperform dumbbell front raises by 41%!
Thus, this exercise is plenty of volume for your anterior deltoids.

Finally, you want to move onto a vertical pulling movement.
For those who are capable, I’d suggest adding in pull-ups given that they work pretty much all of your back musculature and also heavily involve your shoulder and scapular stabilizers. 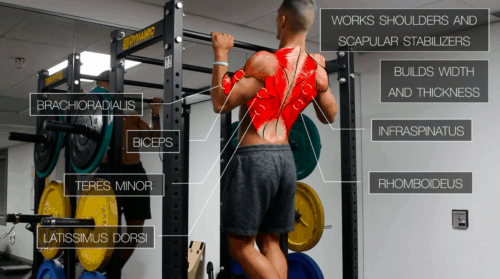 One study by Ness and colleagues found that pull-ups elicit similar lat activation as lat-pull downs but more biceps involvement.
In addition, one study from the Journal of Strength and Conditioning showed that subjects were able to pull 25% greater total weight with pull-ups as compared to lat pulldowns.
Therefore, one could make a case for the superiority of pull-ups to lat pulldowns.
But given that pull-ups are generally a lot more fatiguing, lat pull downs might be the better option here given that the previous upper body exercises are quite energy demanding.
So it’s really up to you, but again, including both in your weekly routine is definitely the best option.

The next two exercises are optional accessory movements for your upper body workout. These are more applicable for intermediate/advanced lifters as opposed to beginners, but I’ll talk more about this towards the end of the article.
With that being said, for the biceps, my go-to choice would be the incline dumbbell curl. As noted in my biceps workout,  it preferentially emphasizes the long head of the biceps which often doesn’t get as much attention. 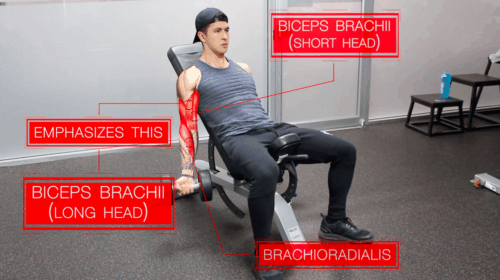 And as shown in this study from the Journal of Sports Science and Medicine, it enables the biceps to be active throughout the whole range of motion. This is beneficial since many biceps exercises only elicit high biceps activation at the start or end of the movement.
Since this exercise targets the long head of the biceps, you could simply choose a biceps exercise that emphasizes the short head on your other upper body day during the week. This way, both heads will be developed in a balanced manner overtime.

Similar to the biceps, due to the flexed position of the shoulder, this exercise is going to emphasize the long head of the triceps. The long head head doesn’t get much attention otherwise, which is why I suggest including this exercise.

Dumbbell extensions on a inclined bench are a good way to prevent muscle imbalances from occurring and minimizing the momentum used. And the incline of the bench helps put the shoulder in an even more flexed position, leading to greater emphasis on the long head.
But keep in mind that any tricep exercise that involves shoulder flexion (where the arm is raised overhead) will effectively target the long head. There’s a variety of exercises that do this, so experiment and see which you like best.

Upper Body Workouts Based on Your Training Level

So to sum up the video, if you’re a more intermediate or advanced lifter, here’s what your upper body workout could look like.

You could also add face pulls or chest flies as an additional exercise if you feel that your rear delts or chest needs more work.
On the other hand, if you’re a beginner and just starting out then this upper body routine will be excessive in volume.
Research has shown that for beginners, isolation exercises don’t provide more muscle growth when compound movements are already used.
Therefore, rather than performing the 2 or 3 extra isolation movements, I’d simply stick to the 4 main upper compound exercises like so.

And as for your second workout during the week, you want to stick to the same general outline I showed earlier in this video but switch up the exercises.

For example, these exercises are a good option for your next upper body workout during the week as they compliment the ones I mentioned in this video.

New Exercises For Your Second Workout

There’s endless possibilities when it comes to structuring your workouts. So experiment with different exercises but stick to the general outline I mentioned earlier.

See below for my upper body workout video that summarizes everything visually, and shows you how to properly execute each upper body exercise: 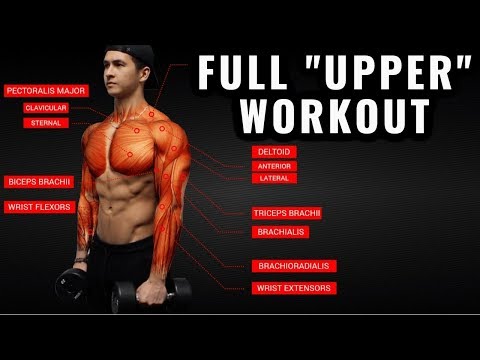 I’ve also made a free Downloadable Upper Body PDF Routine that you guys can access below:

Get The Upper Body Workout Here!

Within the downloadable PDF, you’ll have access to the full workout with exercise tips, a progression scheme to use, and insight into how to set up your other upper body day.

It’s useful to have at the gym when you perform each exercise, so I highly suggest you at least check it out!

168 thoughts on “The Best Upper Body Workout Routine and Exercises”

Should You Be Popping Probiotics?

How to Prevent Arthritis 10 Different Ways

How did you find the Alpine “crime scene”?

“This system equals a cultural genocide”

ABOUT US
Newspaper is your news, entertainment, music fashion website. We provide you with the latest breaking news and videos straight from the entertainment industry.
Contact us: info@makeups.me
FOLLOW US
© Copyright 2017 - Newspaper WordPress Theme by TagDiv